The Timmins Police is sending three recently hired cadets to the Ontario Police College in Aylmer next week to begin the formal aspects of their police training.
At present they are eagerly receiving preliminary training on a variety of law enforcement topics with Const Turner and Sgt Delich here at TPS.
Corey BECHARD is a 24-year-old life long resident of Timmins who attended O’Gorman High School.
From there he went on to complete his post-secondary education at Guelph University obtaining his degree as well as receiving his diploma from Humber College.
His previous work experience includes employment with the Hollinger Golf Club as well as the Northeastern Catholic District School Board and DSB-ONE.
Corey is a Toronto Blue Jays fan who also enjoys golfing and camping as far as leisure pursuits are concerned.
Logan FERRINGTON is a 25-year-old resident of Timmins who hails from London, Ontario.
He is no stranger to the Timmins Police based on his years of previous employment as a Timmins Police – Special Constable.
Logan attended Sir Wilfred Laurier Secondary School in London.
From there he went on to complete his post-secondary education at Northern College (Porcupine campus) obtaining his diploma in Police Foundations.
His previous work experience should serve him well upon his return from OPC.
Logan is an avid Red Sox fan which cannot be helped – we checked.
Logan came to Timmins as an extremely skilled netminder for the Timmins Rock where he excelled between the pipes and has since taken Timmins to be his home.
His hobbies include recreational hockey, baseball, golf, and, as a true northerner, he enjoys hunting and fishing.
Lastly (alphabetically), Ann-Eliza LISTER is a 40-year-old former Torontonian who completed her secondary school education in Orillia.
From there she went on to complete her post-secondary education at Laurentian University obtaining her degree in Law and Justice.
She further completed additional post-secondary education receiving her Police Foundations diploma from Georgian College in Barrie.
She has extensive previous work experience as a Rehabilitation Support Worker (RSW).
Ann-Eliza is a “dyed in the wool” Leaf fan who also enjoys taking part in flight school as a fledgling amateur pilot as part of her leisure pursuits.
Each of these young, enthusiastic, and serious officers will bring their own individual skill sets to the workplace and eventually contribute to making their community a safer place.
The Timmins Police Service wishes each of them the very best in terms of academic success and career development as they attend the Ontario Police College. 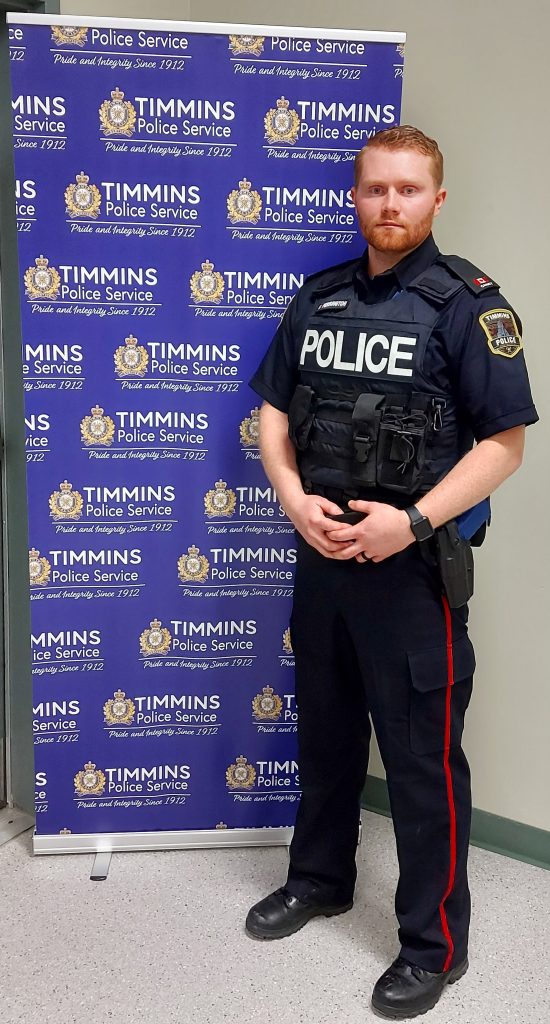