Timmins Police Service Senior Administration officers presenting 20 year pins to three of its uniformed members this morning acknowledging their individual dedication to duty and commitment to their community.
Chief John Gauthier took the lead on behalf of senior management at the Timmins Police Service to present long service and good conduct medals to:
– Inspector Darren Dinel
– Sergeant Marty Delich
– Const. Tara Laroche
This ceremony recognizes these officers and their steadfast devotion to law enforcement efforts with the Timmins Police Service and commemorates their respective professional milestones.
Constable Tara Laroche hails from Timmins and is a graduated of Ecole Catholique Secondaire Theriault who went on to attend the University of Ottawa and went on to successfully complete a Police Foundation Program as part of her post-secondary education.
She joined the Timmins Police Service in October of 1999 and worked in a variety of areas including general patrol, Domestic Violence Investigations, Sex Offender Registry, Records Management, Traffic Section and Community Policing.
She is married and has three daughters but still manages to meet the demands of modern policing.
One of her most significant events in her career is when she rendered investigative and individual support to a single mother who took the time to thank Constable Laroche for simply “being human” and not being the typical authority figure who would indulge in judging her or her family, given her history of police involvement.
Constable Laroche employs empathy and dedication as an example for other officers to follow which she amplifies by adding “Everyone is human and has good in them regardless of their
past. As police officers, we need to treat everyone with the utmost respect. That’s why I do what I do.”
Sergeant Delich hails from Schumacher and graduated from Roland Michener Secondary School before obtaining his Bachelor of Industrial Engineering from Ryerson University.
He joined the Timmins Police Service in October of 1999 and served in a number of capacities including general patrol, ERT, Community Services, Quartermaster and Fleet Management officer. In the course of his tenure with the Timmins Police Service he has achieved the following designations:
– 2001 Perimeter Control and Containment- still serving as ERT Sergeant
– 2001 Collision Investigation
– 2003 Scenes of Crime officer
– 2003 Shotgun Instructor
– 2004 Use of Force Trainer
– 2006 Advanced Patrol Training
– 2007 Certified Armor
– 2007 Search Manager Certification
– 2007 Criminal Investigations Certification
– 2007 Coach Officer Certification
– 2008 Ground Search Instructor
– 2011 CEW Master Instructor
He was promoted to the rank of Sergeant in 2008 and currently is in charge of the Training Section, ERT team and Community Services.
He is married with two children. He is proud of the development and evolution of the TPS ERT team and has responded to approximately 150 critical incidents.
In 2010, he applied his engineering skills to the design and delivery of the current Emergency Response Vehicle C2
Inspector Dinel hails from New Liskeard and is a graduate of the Kirkland Lake Collegiate and Vocational Institute. He completed his post-secondary education at Canadore College achieving a Law and Security Administration diploma in 1999.
He is currently completing his educational development by pursing his Degree in Policing Administration with Wilfrid Laurier University.
He began his career in policing with TPS in November of 1999 in general patrol with a keen interest in narcotics enforcement with stints in the Drug Enforcement Section, Intelligence Section, and has conducted numerous criminal investigation with the Crime Unit.
He is an avid member of the Timmins Police Pipes and Drums Unit
Dinel took an interest in drug and criminal investigations during his uniform duties and began assisting the criminal investigators by writing search warrants for some of their investigations.
In January 2007 he was transferred to the Drug Enforcement Section. Dinel continued in this role and assisted in several major investigations involving drugs and criminal offences.
He was promoted to Sergeant on August 9, 2010 and transferred to the Uniform Patrol Section. He worked with a platoon of officers for approximately a year and a half, and was then transferred back to the Drug Enforcement Section as the supervisor in January 2012.
Sergeant Dinel continued working in the drug section for three years and then transferred back to the Uniform Patrol Section to a role as an Acting Staff Sergeant, until he was promoted to that rank on April 18, 2016.
Staff Sergeant Dinel remained in the Uniform Patrol Section until he was promoted to Inspector on June 1, 2018. During his career he has been trained as a breathalyzer technician, coach officer, ERT member, and crisis negotiator. He is currently designated to teach some courses, including the search warrant course accredited by the Ontario Police College.
The Timmins Police Service takes great pride in acknowledging these officers and their most recent accomplishments in service to the city of Timmins. “Pride and Integrity since 1912” is not a mere motto for these officers and they continue to demonstrate selfless dedication focused on community safety. 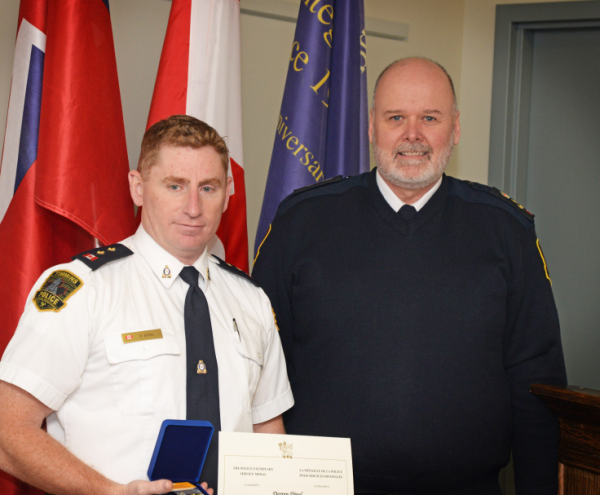 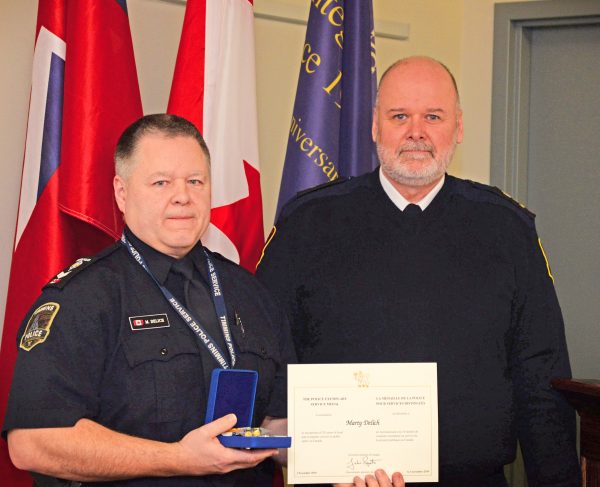