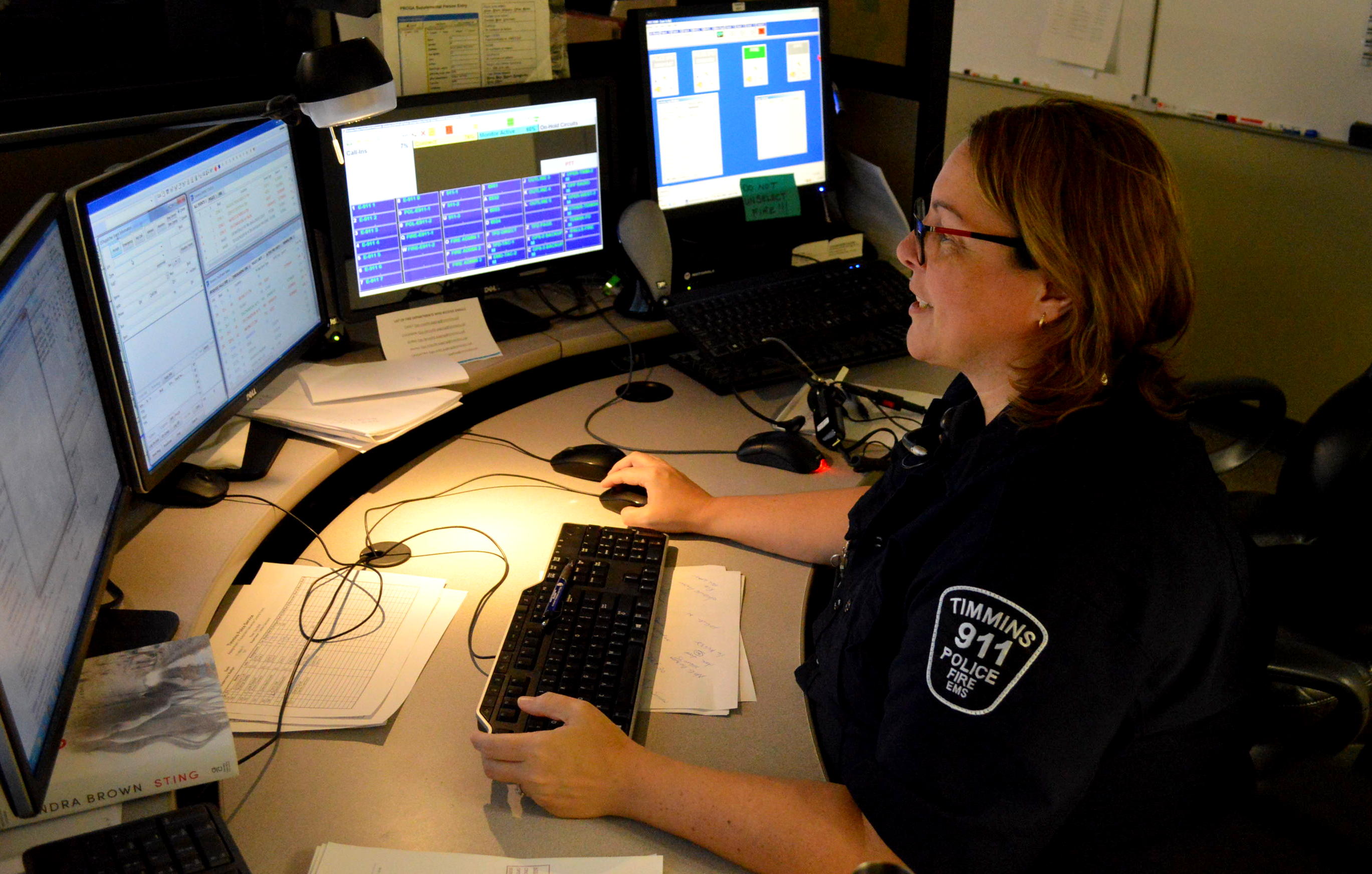 They help people they will never meet. They’re the first people to take the call, but the last to know the outcome. They are rarely seen, but they’re the true foundation of all emergency services. They are 911 Communications Operators, and they’re some of the most important people you will never see.

The Timmins 911 Comms Centre is the area’s Central Emergency Reporting Bureau (CERB), which means that Communications Operators take calls and dispatch for not only Timmins Police, but also fire departments in surrounding communities, and ambulance calls for municipalities as far away as Hearst, Gogama, and communities up the James Bay coast. Timmins is the only communications centre in Ontario where police, fire, and ambulance are all dispatched out of the same place. Timmins dispatchers are also the only ones in the province tri-trained on all three services, and they rotate between each desk every shift. This is a huge specialty and also allows for dispatchers to experience some variety throughout their shifts.

Lynn is a 17-year veteran dispatcher with the Timmins Police Service. She sits in front of six computer screens, quickly clicking in and out of each screen as she completes various tasks. On this particular day, Lynn is sitting at the police ‘call taker’ desk, meaning that she is the one answering 911 calls and transferring them where they need to go. For police calls, she takes the information from the caller, types it in to the computer, and forwards it to her partner at the police dispatch desk, who then dispatches officers to that location.

Even on a morning that is relatively quiet (I can feel the collective dirty look from all of my colleagues for using the ‘Q’ word), Lynn is clicking in and out of screens, opening and closing windows, entering data, and between her multiple screens, I can’t even follow. She explains that along with answering 911 calls, she is also answering non-emergency calls (thefts from vehicles, vandalism, general inquiries, for example), entering calls that are being taken by the duty officer, and responding to inquiries from officers and other members of the Service. Dispatch is clearly the ‘hub’ of the building, and the go-to place for questions from finding a phone number, address, information about an incident – the list goes on.  Even a call that may seem ‘simple’ in nature, a traffic stop for example, requires multiple steps on the dispatch end.

Lynn is a long-time Communications Operator, so there are many things that no longer faze her, however she admits to being affected by calls that make her think about her children.

“I remember a call on the ambulance side, years ago. A little boy, the same age, with the same name as my son had ingested a cleaning solution. I remember being on the phone with his mom and poison control at the same time – trying to get information and relay that to mom, while trying to calm her down.

“Once the medics arrived and the call was done, I had to walk away, take a breath, collect myself. That was a tough one.”

“I don’t know,” she answered. “Most of the time, especially on ambulance calls, we don’t get the end result. We don’t get notified of how things turn out. It’s like reading an entire book, and you get to the end, and the last chapter is torn out.”

I truly hadn’t thought about that part of the job. How difficult it must be, after helping people through some of the most difficult times of their lives, comforting them, calming them, sometimes forming a real bond, not to know how the story ends.

Just then, we receive our first true emergency call of the day. It is a call regarding a possible impaired driver. The caller is on the highway, traveling toward Timmins, behind a driver who he says is driving erratically. The job of the call-taker is to gather as much information as possible about the suspected impaired driver and vehicle. This proves more difficult than it seems.

The first step is to determine where exactly the driver is; to determine which police agency should be responding. It takes several minutes to establish where they are, and then several more minutes to determine the make and model of the suspect vehicle (it’s first described as a black Saturn, then a red Saturn, and then the caller settles on a grey Chrysler). The dispatcher remains on the line with the caller, one ear listening to the call while police are being dispatched and the other ear on other calls that are coming in through the 911 line and non-emergency lines. Eventually, officers locate the vehicle in question and determine that there are no signs of impairment in the driver.

It’s almost as if this call sets off a string of other calls – like somehow it’s opened the floodgates. A call comes in about a large grass fire caused by wires beside a busy road. The fire department is dispatched, as well as officers to block traffic. Because the fire is significant, several calls come in regarding the same incident. At almost the same time, though, another call comes in about a second grass fire in another area. A few seconds later, an officer calls in to notify dispatch that the traffic lights aren’t working at a certain intersection (dispatch will then call the electrical contractor to advise). A theft call from a local gas station follows, along with a suspicious person acting erratically, and another call about an aggressive driver. At this point, I’m simply trying to keep up (rather unsuccessfully). It’s clear that multitasking is an essential skill for 911 Communications Operators (along with patience, empathy, and the ability to remain calm in the most stressful situations).

Listening to these calls in real time is so very different from reading the reports, or hearing about them after the fact. Listening in person, I hear the emotion in the voices of the callers, I hear the urgency, and I feel it, too. I feel tension and stress start to build in myself as the dispatcher calmly puts all of the pieces of the puzzle together. If the call involves wires, call the hydro company. If the call involves a road closure, call the City for barricades. Each piece of the puzzle is just as important as the next, because everything must fit together – meaning those in need get the quickest and most efficient help possible, and our emergency responders go home safe and sound at the end of each day.

While their jobs are filled with stress, heartache, and dealing with people during some of the worst times of their lives, the Comms centre is often filled with laughter and jokes.

“A lot of the time, you’re spending more time with this family than you do your own family,” said Lynn. There is definitely a strong sense of teamwork and close bonds.

“Things get crazy, but you just deal with it. You work through,” she added. “At the end of the day being able to help someone is huge.

“If you can go home at the end of a crazy day and say to yourself ‘today, I’ve done good for people,’ then you’re doing ok.”